Jeffersonville senior offensive tackle/defensive end Dayna Overton has been catching the attention of some of the country’s most prestigious football programs.

Overton has been part of the Jeff High football team all four years, and has spent one year as a member of the Jeff track and field team.

The returning Red Devil made a huge impression on his coaches and teammates his junior year. Last season, Overton became an offensive Varsity starter among an offensive line full of seniors. He quickly earned the respect of his fellow teammates, and his opponents on the other side of the ball.

His time on the track also benefited him in football.

“I believe track helped me as a competitor,” Overton said. “It really helped me get rid of the nervousness when under pressure to perform at a high level. Now after track season, I don’t get nervous in the spotlight like I used to.”

A big reason for his success was his self motivation, and the support from his family, friends, and teammates. Overton’s mother, Amanda Kinnaird, played volleyball in her time at Jeff. The former Red Devil knows what sports mean to the community, and only wants to help him gain a competitive edge on his opponents.

“We’ve seen the success he’s been having and we’re behind him 100-percent,” Kinnaird said. “He’s always been a talented athlete — people are just now starting to notice.”

Overton’s parents have been there every step of the way, cheering him on from home football games, as well as track meets that are as much as four hours away.

“I think that the motivation to push myself to be a better player was always inside of me. I just had to find it with myself,” Overton said. “But also having a great pair of parents behind me, always motivating me to get better everyday.” 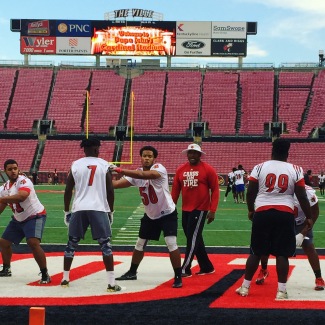 Dayna Overton working with other prospective lineman during his training

Teammates, like quarterback Cameron Northern, have noticed the leadership skills he’s developed recently. Aware with the hard work he’s been putting in, they’ve set him to high standards.

“I hope to see him get his first offer and just become the player I know he can be,” Northern said. “I just want to see him dominate, see him being All-Conference, and maybe an All-State performance. He used to be an okay football player, but now he’s one of our best lineman and hardest workers.”

Jeffersonville head coach Alfonzo Browning has seen the way Overton has been growing the past two years. Browning’s star tackle has been an unsung hero on his high-powered offense.

“Dayna’s grown up a lot in the last two years,” Browning said. “His biggest improvement has been mental. He’s realized that he has a ton of untapped potential that he is now getting a grasp of. He’s helping lead a unit that will probably be the strength of our team.”

On July 15, Overton’s hard work paid off, as the tackle was invited to a seniors-only camp at the University of Louisville called Light up the Ville, which was hosted by Louisville head coach Bobby Petrino and his staff.

The camp marked the third time in the past year Overton has been invited to their training facility. Over the past summer, Overton has attended camps at Purdue, Ball State, Louisville and Western Kentucky.

“Being with the coaches again was so great. I loved going up against some of the top recruits in the country,” Overton said. “Going up against good competition just makes you a better athlete.”

Overton’s play stood out to offensive line/run game coordinator coach Chris Klenakis  so much that after the camp, Klenakis told Overton he had “made his guys look like fools” when referring to the 1-on-1 drills with the offensive linemen.

“He really stood out and performed well in several drills, and almost every guy in the D-line and O-line were at least three-star recruits,” Kinnaird said. “That camp was absolutely stacked with talent and he shined among them.”

With all the camps and recruiting news, Overton still gets support from school mates and friends. His teammates continue to push him to achieve his goal of getting offered a scholarship.

“Amongst the whole news about recruiting me, I’ve really noticed how much love and support I have from friends, family, and teammates,” Overton said. “I’m truly loving it.”